The growth of 3D modelling 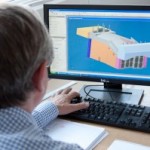 Architecture – the days of hand-drawn blueprints and plans for a new building are now long gone. 3D modelling now adds depth and perspective to initial designs. The ability to give both birds-eye views and ground perspectives of buildings allows architects to showcase their work more effectively to clients than ever before.

Video Gaming – video gaming is huge at the moment and with the advent of wearable technology, the realism deployed in video gaming is staggering. None of this would be possible without 3D modelling. The scenes, props and characters are brought to life through 3D providing a visual reality that has made gaming hugely popular.

Film & TV – 3D modelling is used extensively across the entertainment industry. Whether for special effects, creating scenes and backgrounds or CGI, the use of 3D modelling has revolutionised the industry

Publishing – The use of 3D modelling in publishing is becoming more evident in the production of text books and illustrated publications. 3D modelling allows for the creation of fantasy images and depictions of the future.

Science – Whether it’s recreating the flight of a bird, the effects of an earthquake or the geological formation of a volcano, 3D modelling is used extensively in science to illustrate the world around us.

These are just some of the industries that have been changed by 3D modelling. As the world of 3D modelling evolves and 3D printing becomes more prevalent it will be fascinating to see what lies in store for the future.

How CAD Design got rid of calluses!

There’s no doubt that the emergence of CAD Design has revolutionised the manufacturing and engineering design industry but there’s still a few ‘old school’ draughtsmen out there who yearn for the old days of pencil and paper.

It’s definitely true that some of the draughtsmen in the ‘Pre-CAD design years’ were truly artists who could create drawings with extraordinary attention to detail and depth which can almost compare to some of today’s 3D modelling.

Draughtsmen who started their careers before CAD still retain a certain amount of affection for the old drawing boards, compasses, protractors, triangles, erasers and various other devices that were needed for preparing a drawing by hand. Some would say that they miss the mental agility required to create really challenging and complex drawings which CAD can now turnaround significantly faster.

What they don’t miss however are the calluses that used to appear on the fingers from repetitive drawing for 7 to 8 hours a day. There would also be pencil grooves that formed on the writing fingers that simply wouldn’t go away!

CAD may have got rid of the calluses and pencil grooves but the mental agility is still needed. CAD started to emerge in the 1960s and really started to gather pace by the late 1980s early 1990s. The transition from drafting to CAD design has brought about unequalled precision at a fraction of the time and cost. Repetitive drawings are easily produced and CAD design is behind all the mass manufacturing of electronics that we see today.

So would a draughtsman abandon CAD design and go back to the drawing board? Not a chance. The rose-tinted spectacles may still be on but the reality of modern design and all its complexities and challenges requires a new type of expertise that CAD design delivers in abundance.

Outsourcing anything can be a bit of a leap of faith but when it comes to CAD design and drawings it can pay to take that leap and there are two main reasons why. Let’s take a look at those two reasons:

It will save you money – Yes, it’s true. If CAD isn’t your main raison d’être and you don’t have a constant need for it then it doesn’t make a lot of financial sense to employ your own in-house team to do it. They won’t be busy enough and you won’t be able to justify the costs of employing them. Not only that, when it comes to CAD you have all the equipment and software licences to consider. Better to outsource and save yourself the burden.

Quick turnaround – By dealing with a third party provider like DATS CAD Services whose prime purpose is to produce CAD drawings and design services, you can be sure that they have all the know-how, processes, management structures and equipment in place to provide the kind of focus you need on your project. This means that we can turn it around quicker and you will be able to reap the benefits within your own organisation at a speedier rate.

Any business that requires CAD drawings clearly operate in an environment where the output has to be precise and the delivery needs to be spot on. Keeping control and retaining the quality is a key concern for any business when outsourcing so that’s why it pays to outsource to companies like DATS CAD Services who are one of the UK’s top providers for outsourced CAD design services. With a string of high profile clients in their portfolio, quality and precision is the only thing that passes muster.

Check out http://datscadservices.co.uk/ to find out more about outsourcing CAD and how it can help you.